The Astor Brownstone on 34th Street 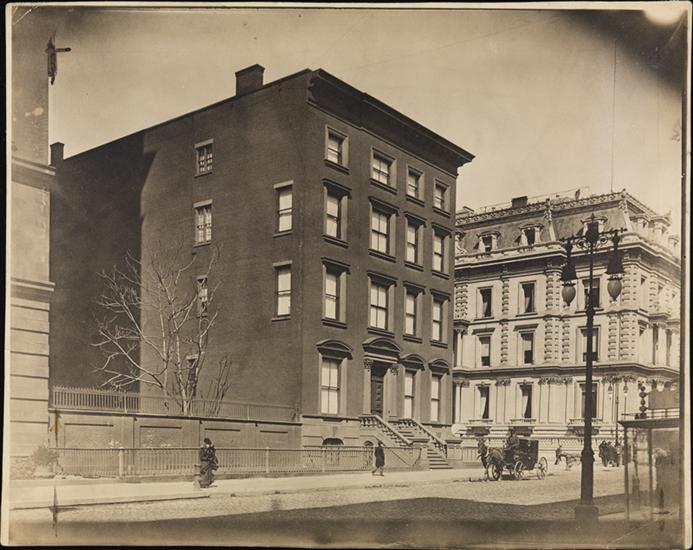 In 1854 socialite Caroline Webster Schermerhorn married the enormously wealthy William Backhouse Astor Jr., grandson of the famous fur trader John Jacob Astor. As a wedding present William's Father William Backhouse Astor Sr. presented the couple with half of a large empty lot John Jacob Astor had bought during his real estate buy out spree. The large corner lot they were given was at the corner of 34th street in a neighborhood that was becoming fashionable. Since the couple didn't plan on entertaining much ( Because the reigning Mrs. Astor at that time was Margaret Astor, Caroline's mother-in-law ) the couple didn't need a huge brownstone with numerous entertaining rooms, although it did have three reception rooms. The result was a modest brownstone which was quite comfortable and actually quite wide, to make room  for the needed drawing room. At the left side of the property was a small walled garden and fountain. 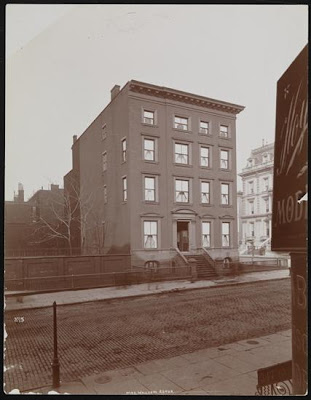 The comfortable interiors were done in old world styles and had exquisite antiques. The first floor had a beautiful georgian drawing room, three reception rooms done in the Adam, Louis XVI and Empire styles, a Regency styled dining room and a oak paneled library. Shortly after William and Caroline built their brownstone, William's older brother, John, and his family built a brownstone on the remaining half corner lot. Their home was done in a more french rivera style but was still done in brownstone. 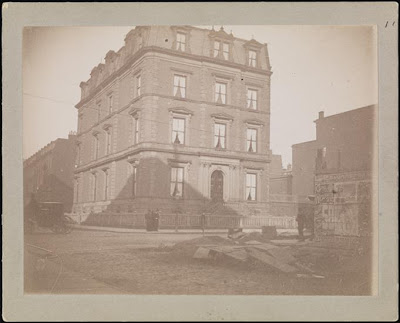 The neighboring brothers was content with each other but didn't exactly agree on everything ( one was John was a Democrat and William was a Republican like his family ) which drove them apart until they became practically unspeakable to each other. Everything changed when William Sr. died. In his will William Sr. had set out $90 million of his $100 million fortune to be divided in half between his sons giving each $45 million. This left it unclear who was the head of the family, John assumed it was himself since he was the older son but Caroline felt differently and named her husband head of the house and her The Mrs. Astor. Since she was the Mrs. that meant she was going to have to do a major amount of entertaining, but that didn't bother her. Since old society disgraced lavish display of wealth on the exterior of one's home to show how wealthy you were ( like the unfortunate A. T Stewarts and their mansion they built across the street from Caroline's brownstone but they might as well hav lived o the moon because the great lady never noticed them ) 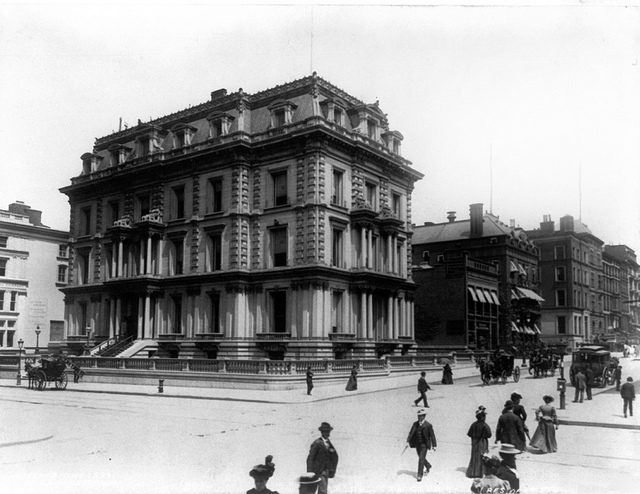 The A. T. Stewart mansion made the modest but costly Astor brownstone across the street look like second class 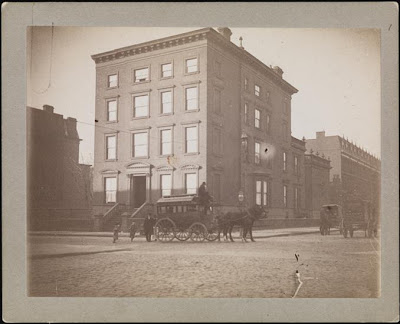 so Caroline decided to stay at her comfortable brownstone and do renovations. She had the Georgian drawing room completely redone and turned into the then fashionable Rococo style, it was in this room the family had their signature family portrait done 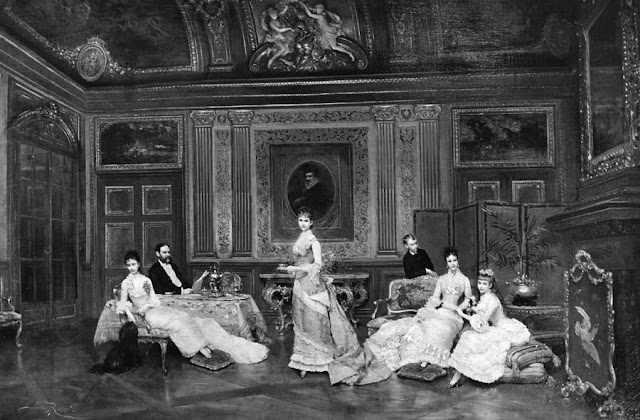 Next came the Regency dining room which was completely ripped out of everything and replaced with Louis XV interiors ( which were latter copied by the Wideners for their dining room ). 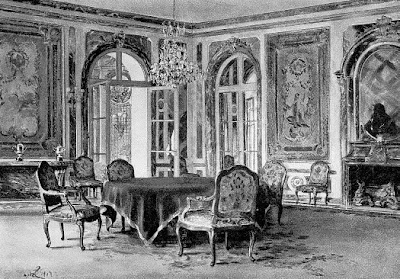 The library and reception  rooms stayed the same along with the entrance hall. Caroline also needed a ballroom for her lavish entertaining and someplace to house her huge art collection so she added a ballroom wing to the house. 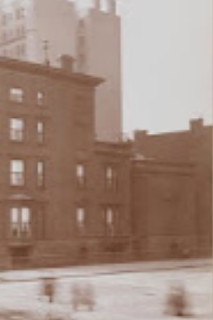 The ballroom wing would replace the stables and was to be the largest room in the house. It would have beautiful polished parquet floors covered by the Schermerhorn heirloom rugs, in the center of the room was Caroline's huge round red velvet ottoman which was right below the chandelier. Around the room were various plush chairs and sofas and Caroline's famous red silk divan ( called behind her back the "Throne" since she was the queen of society ) the walls were completely covered with art work. The ballroom could hold 400 people and since that was how many people her ballroom could fit comfortably that became the magic number for how many people were in society starting the famous "400" and the ballroom from then on became society's inner sanctum. 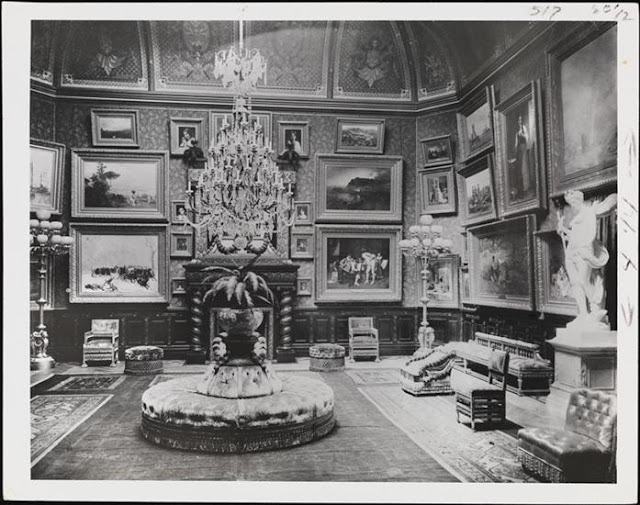 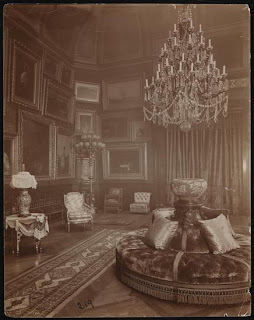 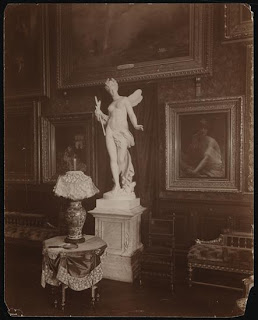 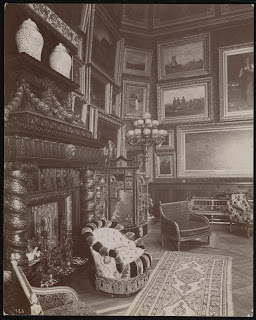 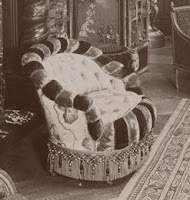 Mrs. Astors's divan now in the Metropolitan Museum of Art 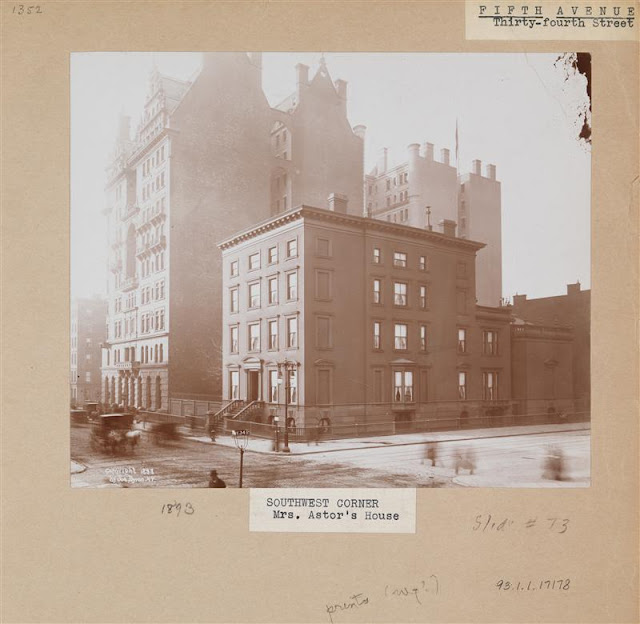 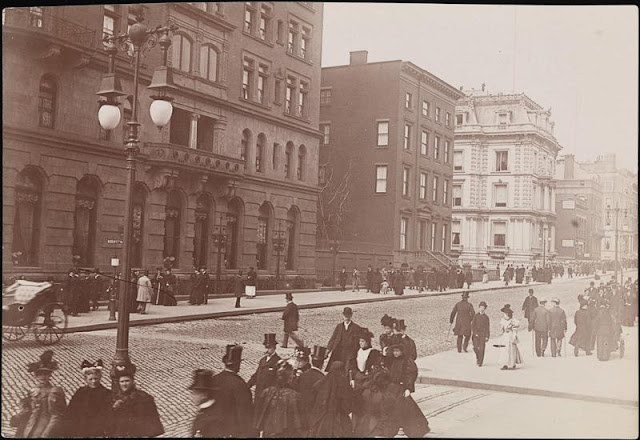 The noise, traffic and dust literally forced Caroline out of her home of more than 40 years. She moved to a much safer location, while her son commissioned a hotel on the site to out rank the Waldorf, which he named Astoria. The hotels eventually merged to form the Waldorf-Astoria the biggest and most luxurious hotel in the city. Today the Empire State Building stands on the spot where Caroline once received guests.