As the last survivor of the Vanderbilt heirs ~ the last surviving
grandchild of Commodore Vanderbilt ~ Florence A. Vanderbilt
Twombly had led exactly the kind of life of pomp and splendor
that the rich were supposed to lead.
At her New Jersey estate, 'Florham', Mrs. Twombly led her long life

in extreme elegance and luxury ~ giving grand entertainments in the
massive ballroom and in the marble entrance hall. Her chef, Joseph
Donon, made the finest foods of the day; at a salary of over $25,000 a
year.


At 'Florham' ~ Mrs. Twombly and her youngest, unmarried, daughter
Ruth ~ her lifelong companion ~ led the lives of enormously wealthy
heiresses. Now two recluses lost in a world that had quickly changed
from what they had known, they lead out their remaining days in
undisturbed immense luxury at 'Florham'.

After surviving a civil war, depression and two world wars, the last
remaining granddaughter of Commodore Vanderbilt died on April
11, 1953, at the age of 98. It was said by her grandson Shirley, "When
Grandma died, so did Florham". And there went one of the last
surviving Gilded Age 'grand dames'.
Posted by Tyler Hughes at 6:41 AM 5 comments:

Here is the incredible biography of Mrs. Henry White written by her friend
and biographer, the collector Robert Bruce.

Emily Vanderbilt Sloane White. Second daughter, and fourth child, of William Henry Vanderbilt (1821-1885), and Maria Louisa Kissam Vanderbilt (1821-1896); grandaughter of 'Commodore' Cornelius Vanderbilt (1794-1877), founder of the family fortune. Wife of William Douglas Sloane (1844-1915), president of the W. & J. Sloane Company; furniture makers and decorators. Charitably minded, together they founded the Sloane Maternity Hospital in New York, the first of its kind. Renowned hostess of New York aristocracy's golden era, who, along with her sister, Florence Vanderbilt Twombly; her sister-in-law, Mrs. Cornelius Vanderbilt; and friends, Ruth Livingston Mills, and Mrs. Elbridge T. Gerry, came to exercise complete dominance over "Old Guard" New York and Newport Society. Widowed five years, in 1920 she married superb diplomat, and family friend, Henry White, a widower of age seventy. In the words of Theodore Roosevelt, "The most useful man in the entire diplomatic service." Widowed again, in 1927, she lived on for another score of years entertaining at her New York townhouse, and at her vast country estate, 'Elm Court', in Lenox, Massachusetts ~ of 93 rooms it was the largest shingle-style house ever constructed; its greenhouses, providing flowers and fruits in all seasons, covered over two acres of land. At moments she had moved those on Fifth Avenue, and in Lenox, with the fatal luxury of her exquisite maroon Rolls Royce, of the Vanderbilt fleet. Her ample fortune allowing such elegance throughout her lifetime. Passing away peacefully in Lenox, her service was held there at Trinity Church, with music provided by her favorite organist, Archer Gibson, assisted by Johnston F. Stewart.
Biography compiled and written by Robert Bruce
Posted by Tyler Hughes at 5:41 PM 4 comments:


Guess what everybody! ..... Gilded Age Era is now on Facebook!

Come and friend me or join my group: "Newport ~ Queen of Resorts"

or follow the extremely informative and great group "Mansions

of The Gilded Age". Looking forward to seeing there! 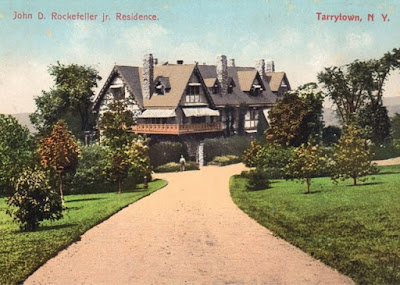 Here is a wonderful postcard of the John D Rockefeller Jr estate in
Tarrytown, New York, located on the grounds of 'Kykuit'. Still owned by
the Rockefeller family today.

Photo: GAE Collection.
Posted by Tyler Hughes at 9:54 AM 3 comments: