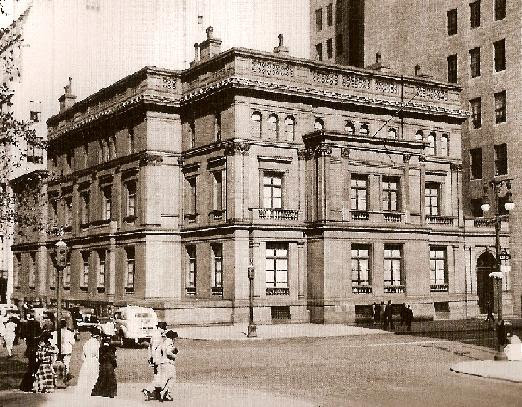 A great many people had gathered that day in 1945 in front of the dingy, brownstone mansion that stood at 640 Fifth Avenue, which crouched in the shadows of the skyscrapers surrounding all sides. It was moving day at the Vanderbilt mansion. New York City's long acknowledged social queen, Mrs. Cornelius Vanderbilt III, Grace, was moving out of 640 5th Ave. and moving to a limestone mansion uptown overlooking Central Park at 1048 5th Ave. 640 had long been the scene of Mrs. Vanderbilt's charity balls, dinner galas and exquisite luncheons. Less than a year ago, she had hosted her last ball at the mansion, a charity ball benefitting the Red Cross. For the last time, the French salons, marble entrance hall, gilded ballroom and the pink art gallery had been opened to guests. That day however, it was all being taken away.

Movers and workers hustled about, as the gilt and golden furniture that had graced the halls of the home were carried out. 1048 was considerably smaller than 640, so much of Mrs. Vanderbilt's furniture and art collection would be donated to the Metropolitan Museum of Art. This included the entirety of the artwork that had hung in the art gallery at 640, which was composed of pieces collected by William H. Vanderbilt Sr., who had built the mansion at 640 Fith Avenue in 1882. Also leaving Mrs. Vanderbilt's possession was the famed 9-foot malachite Demidoff vase, which had stood at the center of the marble entrance hall. One prized piece of the collection that would be moving with Mrs. Vanderbilt, Jared Flagg's 1877 portrait of Commodore Cornelius Vanderbilt Sr., founder of the family's fortune. The portrait had long graced the entry of 640 5th Ave.

As the last moving truck carried off Vanderbilt goods to either 1048 or the Metropolitan Museum, Mrs. Vanderbilt took one last look at 640, for decades the center of her highly-sought-after entertainments, as if saying good-bye to an old friend. Them, with her gloved hand instructing her chauffeur, she took off to her new limestone townhouse at 1048 Fifth Avenue. Shortly after, 640 Fifth Avenue was demolished, and so with it, went the last great Vanderbilt mansion built on Fifth Avenue, once, long ago, nicknamed "Vanderbilt's Row".

To read the story behind 640 Fifth Avenue, along with details and why the home was sold, please click HERE.