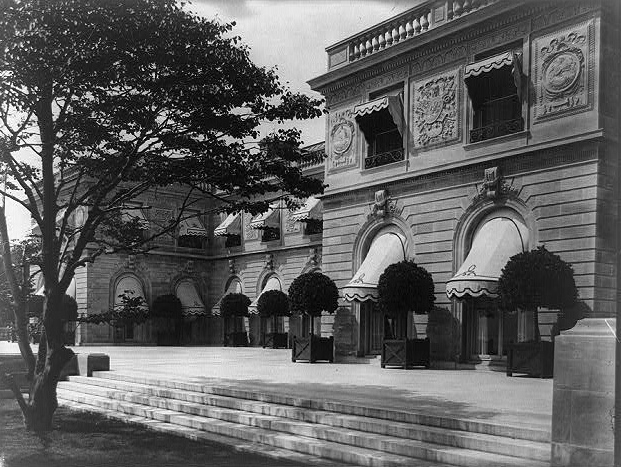 On April 15 1912, the brand new luxury liner, Titanic, sank to the bottom of the ocean. It was her maiden voyage. There were over 1,500 people still onboard. One of them was George D Widener and his son Harry. In one of the 20 lifeboats sprawled around the wreckage was Eleanor Elkins Widener, mother of Harry and wife of George. That night Eleanor became a widow. 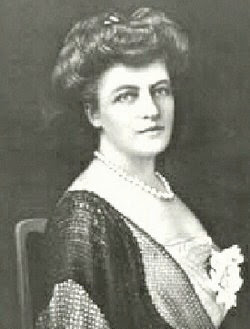 Eleanor Had Come From The Immensely Wealthy Elkins Family of Philadelphia. You Could Say She "Grew Up With A Silver Spoon In Her Mouth"

Eleanor returned home without her husband and her son and was met by the Widener Family's private train. For months she mourned at the Widener estate, Lynnewood Hall, alongside her other son and daughter. Finally three years after the sinking, she married Alexander Hamilton Rice, a famous explorer . 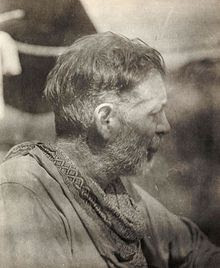 Alexander Hamilton Rice On One Of His Numerous Safari Expeditions, Which Were Paid For By Eleanor's Money

As a memorial to Widener, Eleanor had their Newport cottage, Miramar, completed, which had been started before the Titanic. She lived there for most of her mourning period and continued to live there with Rice. 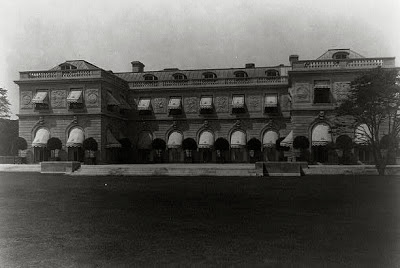 Miramar Was One Of The Largest Homes In Newport, It Was Built In Less Than 3 Years And Only That Long Because Of Eleanor's Mourning Period

The most sumptuous part of the estate was it lavish gardens and grounds. On the property were a large garage unit, rose gardens, green houses, ice house, gardener's cottage and a small house toward the front of the property. 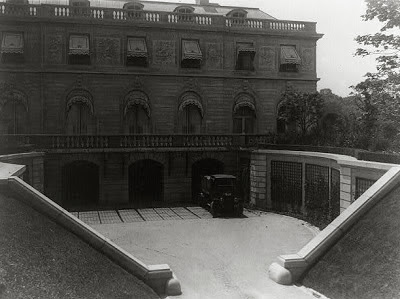 The Service Court, Which Was Normally Filled With Rolls Royce Limousines, Was Cleaned Daily By 5 Workmen 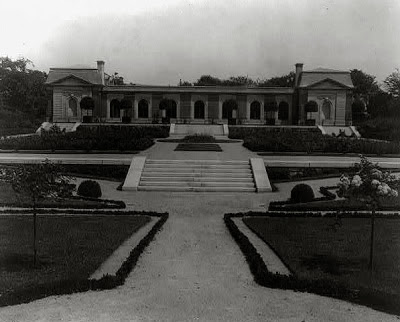 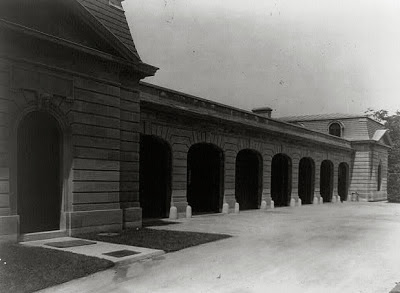 The Garage Unit, Where The 16 Rolls Royce Limousines Were Cleaned Daily, Whether Used Or Not, By 10 Men 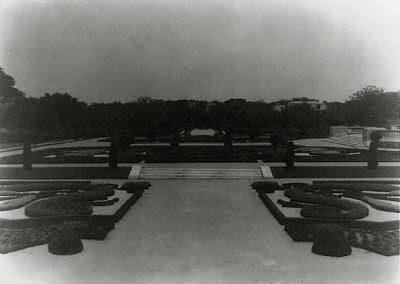 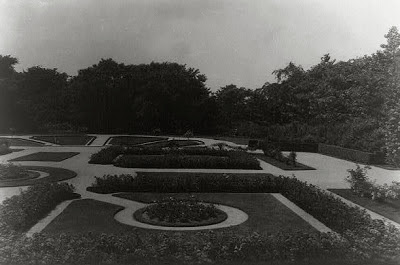 The Lavish Rose Gardens Were Maintained By A Staff Of 17 Gardeners, Who Resided In A Large Cottage Near The Entrance 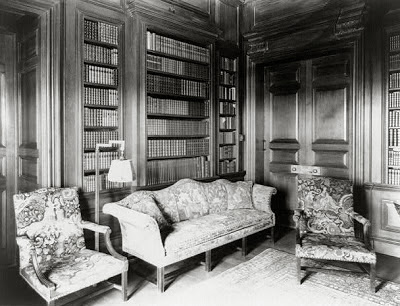 The Living Room, Which Was Basically The Library. It Was Filled With Rice's Collection Of Expedition Volumes 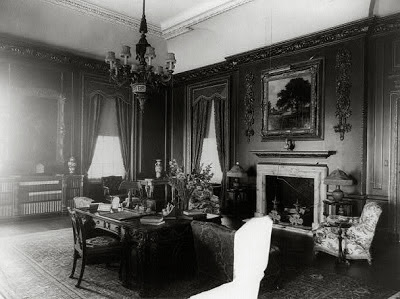 The Reception Room, Where Eleanor Had Tea Every Morning, The Paneling Around The Fireplace Was Imported From Europe

The Dining Room Of Miramar, The Table Could Seat 50 People. The Rice Held Most Of Their Entertainments In Here

Miramar was officially opened with a large ball in August, with 500 guests in attendance. Eleanor greeted the guests with her daughter, (Eleanor) Mrs. Fritz Eugene Dixon, who also lived at Miramar. The guest danced in the ballroom and on the terrace, right next to the sea. The trees of the estate were adorned with electrical illuminations and the music was provided by the three orchestras. 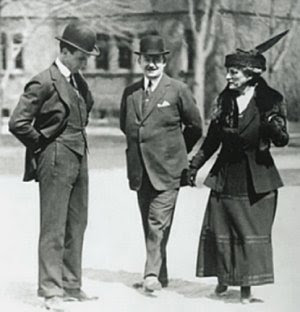 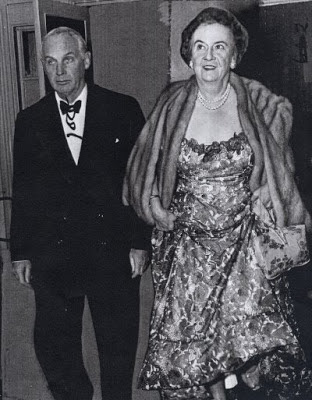 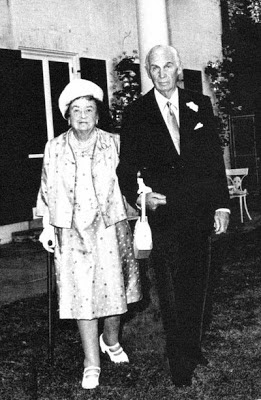 In Their Later Years, The Wideners Retired To Their Large Farming Estate, Giving Miramar To The Rhode Island Episcopal Diocese

Miramar passed through many hands, eventually ending up in David B Ford's. He is now immersed in a restoration renovation with John Tschirch (architectural historian at the Preservation Society of Newport). 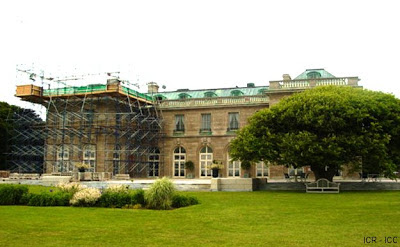 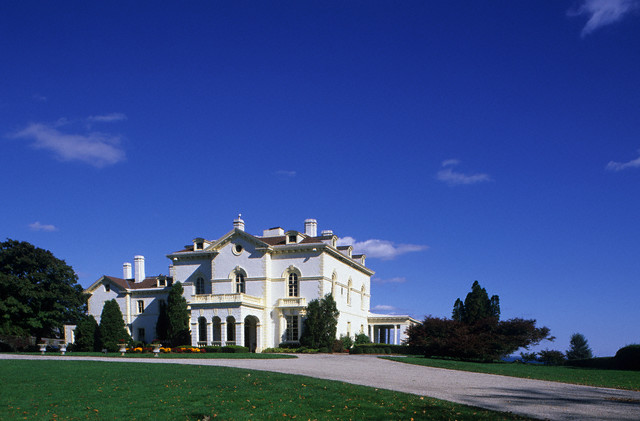 Beechwood was first built for merchant Daniel Parrish by architects Andrew Downing and Calvert Vuax. The first cottage burned down in a fire and the one that stands there today was built. The mansion and grounds were purchased by millionaire William Backhouse Astor Jr for his wife Caroline Schermerhorn, Queen of New York City Society. Caroline brought in architect Richard Morris Hunt to redesign the "cottage" and turn it into a mansion capable of holding lavish parties. The renovations included the adding of a large ballroom to the back of the house and the adding of a servant's wing. After her son, John,'s death, Beechwood was sold by his son, Vincent, to Count and Countess Paul De Kotzebue. The Count sold the estate to Mr. and Mrs. William C. Clark of Newport and Palm Beach. They closed down 11 of the estate's 48 rooms and used the house for lavish entertaining. Today it is undergoing restoration renovation by billionaire Larry Edison. Click HERE to find out more about the Astors and their mansion in New York City. Click HERE to find out more about Beechwood.
Posted by Tyler Hughes at 4:09 PM No comments:


Hammersmith Farm is a large Newport "cottage", formerly owned by the Auchincloss family. It was first sold to John Winthrop Auchincloss, who sold it to his brother, Hugh D. Auchincloss. When Hugh died, the estate passed to his son, Hugh D. Auchincloss Jr, whose 3rd wife was Janet Lee, former wife of Jack Bouvier. His stepdaughter, Jacqueline Bouvier, was married here to Senator John F Kennedy. After Hugh's death the property was sold. It has passed through many hands and is today a private residence. The Auchincloss family still resides on the property and own most of the grounds, though. Hugh D. "Yusha" Auchincloss III, Hugh's son, now lives in "The Castle", a large house that was originally the guest house. "The Palace", formerly the garage, is now occupied by Hugh III's sister. "The Windmill", a large non-working windmill by the ocean, is resided in by Hugh III's half sister, Nina. To read about "The Windmill", "The Castle", "The Palace" and other surviving Newport estates, click HERE.
Posted by Tyler Hughes at 2:48 PM 28 comments: 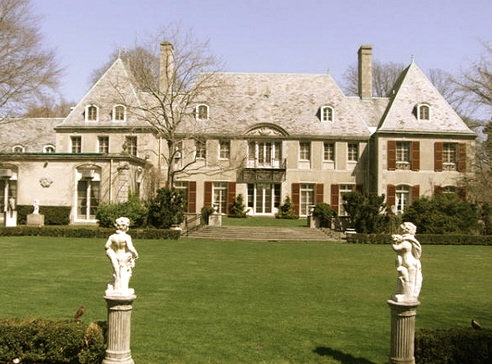 Below is an article of the large Newport estate Champ Soleil. The estate was built by Lucy Drexel Dahlgren and was later purchased by the enormously wealthy Robert Goelet, who was downsizing from his other Newport estate, Ochre Court. Click HERE for more. 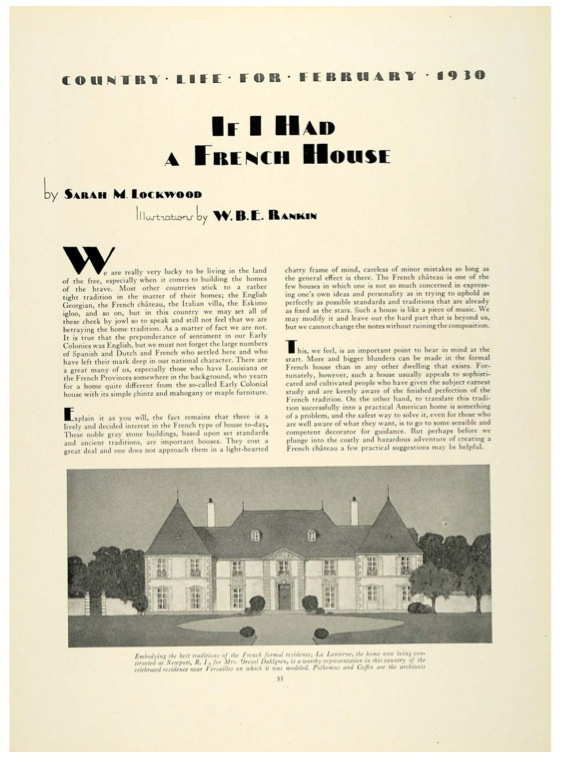 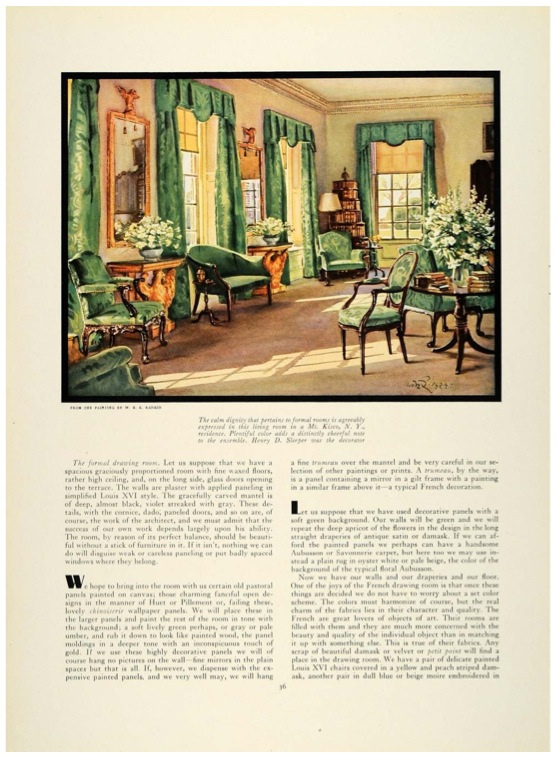 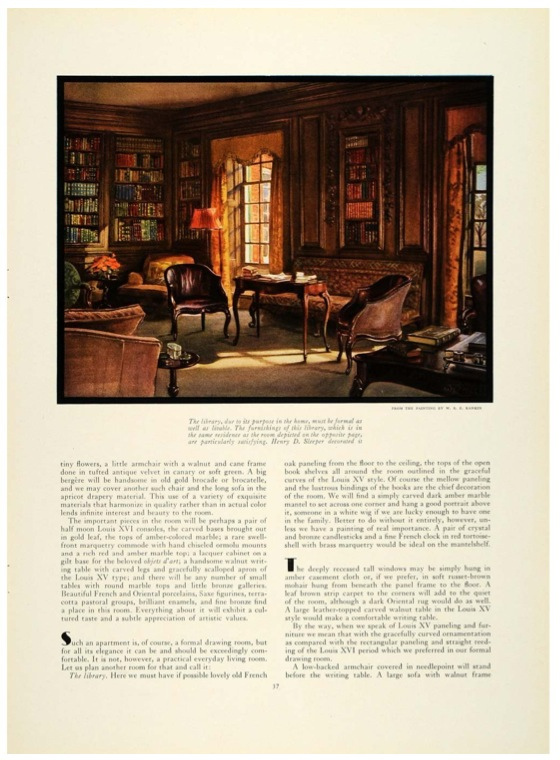 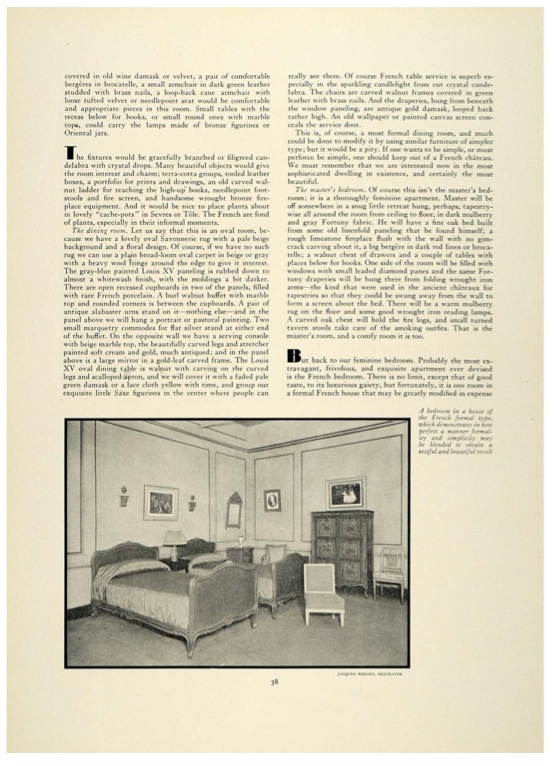 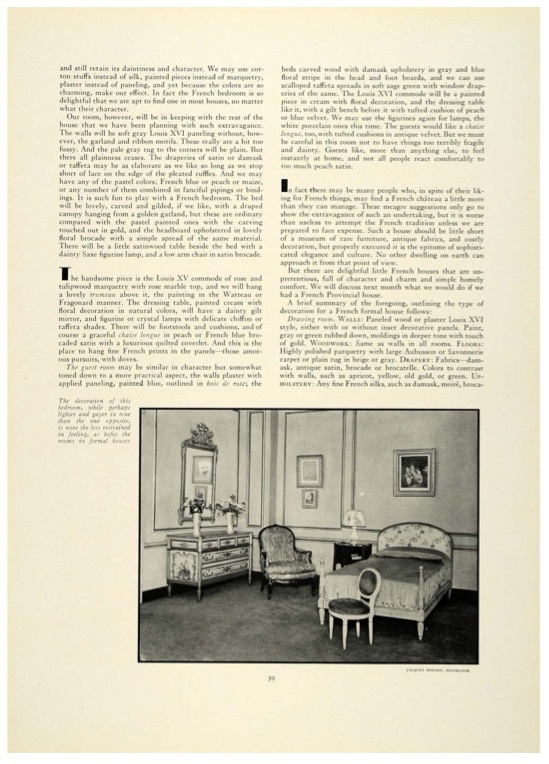 The Whim, The Newport Cottage Where Oatsie Charles Spends Her Summers 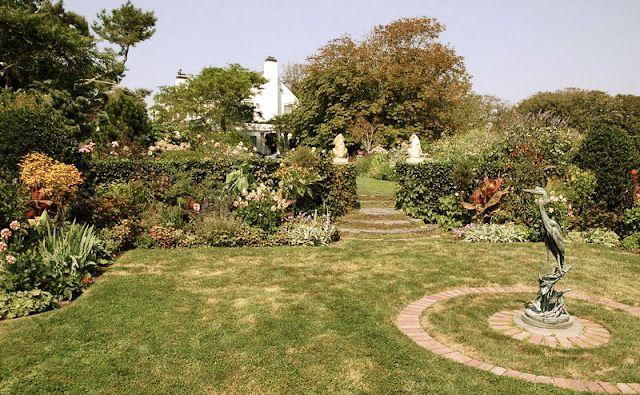 The Whim is the Newport cottage of Oatsie Charles, formerly the caretaker's cottage of the estate Land's End. Mrs. Charles had originally lived in Land's End, but she moved to the cottage after her husband's death. Mrs Charles renovated The Whim before she moved in, turning it into what she called "an elegant jewel box". In The Whim she placed her large collection of furniture and rare artwork, which included the antique paneling that she purchased from the auctioning of nearby Marble House. She made her biggest renovations on the grounds, which she turned into magnificent gardens. She recently had decorator John Peixinho redo the study at The Whim. "I told him I wanted a media room" said Charles "Not that I had any idea what that was. But I liked the sound of it". He completely redid the room, even re-covering her late husband's Barcalounger. Today, Oatsie still lives at The Whim and enjoys walking through her topiary wonderland. Click HERE to find out more about Land's End.

Tennis At The Newport Casino 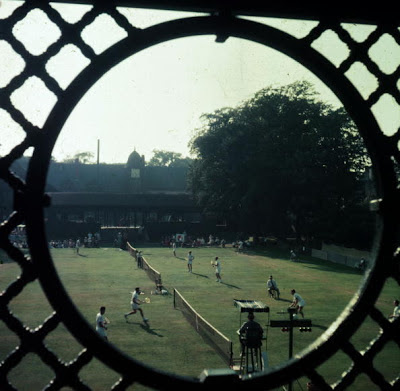 Above is a photo of a tennis match going on at The Newport Casino, built by James Gordon Bennett. Tennis was popular at the Casino, especially after Jimmy Van Alen (whose mother was Mrs. Louis Bruguiere and whose family had been summering in Newport for over four generations) founded the Tennis Hall of Fame and VASSS (Van Alen Streamlined Scoreing System). The Newport Casino is still open today. For more click HERE.
Posted by Tyler Hughes at 7:26 AM 34 comments: 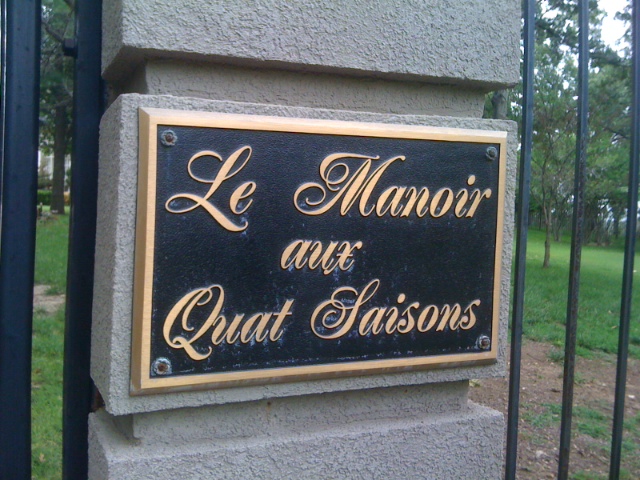 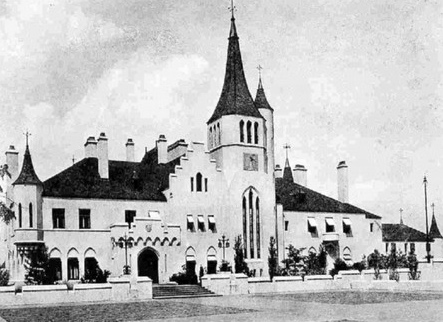 Beacon Towers was a large, castle like estate, built for the Women's rights campaigner Alva Vanderbilt Belmont. Alva had been married to the enormously wealthy William K. Vanderbilt, but divorced him for her second husband, Oliver Belmont. On Belmont's death, Alva had the architectural firm of Hunt & Hunt build a massive estate on Long Island, which she would name Beacon Towers. Toward the end of her life, Mrs. Belmont began to sell her many properties. Brookholt (click HERE for more), her estate also on Long Island in 1915, her townhouse at 477 Madison Avenue (click HERE for more) in 1923 and later on her Newport estate, Belcourt Castle (click HERE for more). Finally she sold Beacon Towers in 1927 to William R. Hearst. The estate was eventually demolished into a pile of rubble.
Posted by Tyler Hughes at 2:32 PM 3 comments: 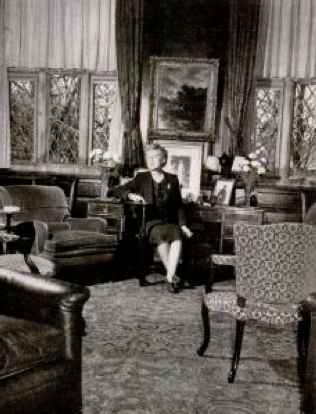 "My Darling Mother" Jimmy Van Alen once said of his mother "Was The Last of Those Running A Taut Ship". He was right. Mrs. Bruguiere had originally been married to James Laurens Van Alen of Newport and she had lived with him and their family at his family's Newport estate, Wakehurst. Daisy, as Mrs. Bruguiere was known, had once said that "Wakehurst is the last properly run estate left in Newport". She was considered queen of the Old Guard and was, for 6 decades, Matriarch of the Van Alen Family. Once when a friend called to ask whether or not Daisy had received a art book she sent. Daisy promptly replied "I did and I promptly threw it in the wastebasket, you know I don't like those kind of books". I am currently seeking out information regarding Mrs. Bruguiere and the Van Alens with the plan of eventually writing a book about them. The photo above is of her in the sitting room of Wakehurst.
Posted by Tyler Hughes at 4:27 PM 2 comments:

Design For The Entrance Grill To The Vanderbilt's Marble House

Above the design for the entrance grill to the Vanderbilt family's Marble House, their cottage in Newport. The cottage was built by Richard Morris Hunt and contained about 500,000 square feet of marble. It had been constructed for William and Alva Vanderbilt. Alva later on divorced William and claimed Marble House as part of her divorce settlement. Afterwards she married Oliver Belmont, who lived in another Newport cottage not far from Marble House, called Belcourt Castle. Shortly before her death, Alva sold the cottage to the Frederick H Princes. In 1957, Marble House was the scene of the Tiffany Ball , held by the Preservation Society of Newport to raise funds for their preservation work. Marble House was later bought by Harold Vanderbilt (Alva and William's youngest son), who donated it to the Preservation Society in honor of his mother.