It was November 23, 1984, the day after Thanksgiving, when Palm Beach and New York socialite and philanthropist Mollie Wilmot was woken up in the early hours of the morning by her maid at her stylish Palm Beach estate, which was next door to the Kennedy Family Compound. The maid announced her mistress had visitors. Mollie, assuming it to be the photographer from Town and Country who was scheduled to photograph the inside of her beautiful home and the marvelous salt-water pool gracing the lawn overlooking the ocean, decided that they should get some coffee first. It had been a stormy night last night, and something bitter would be good to wake her up. So, she passed through her drawing room with leopard-printed walls, and into the kitchen. When she finally arrived on the patio an hour later, still in her dressing gown and slippers, what she saw was something completely unexpected. Lying less than a few inches away from her pool, was a massive, 197-foot Venezuelan rust bucket cargo ship named "The Mercedes" which had rammed itself into the seawall at the edge of Ms. Wilmot's property during the rainy storm of earlier that night. 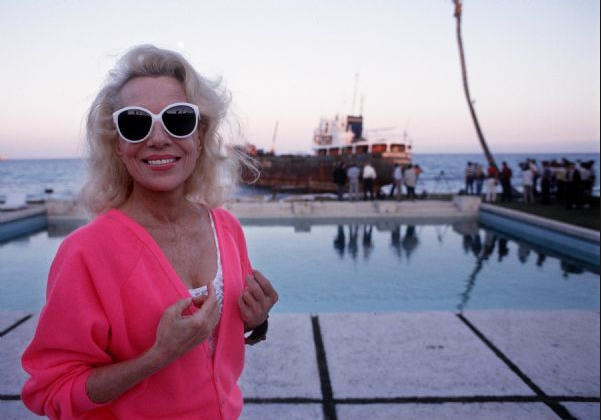 Mollie Wilmot, wearing her infamous white sunglasses, stands
before The Mercedes at her residence in Palm Beach, FL.

Overcoming her fear of Venezuelan rats escaping the ship, Mollie quickly rushed inside into her living room. Removing the Picasso hanging on the wall for safekeeping, and spreading plastic across the gleaming carpets, she invited the crew, Captain and the police officers, who had quickly arrived at the scene, into her home for some finger sandwiches, coffee and caviar, later also, too, serving martinis to the journalists that had showed up. She also fed the ship's cat, which they later gave to her and named "Mollie Mercedes". She in turned handed it over to her neighbors, the Pulitzer family, who sent it down to the spa to be properly fluffed and later was outfitted in a velvet collar with gold. 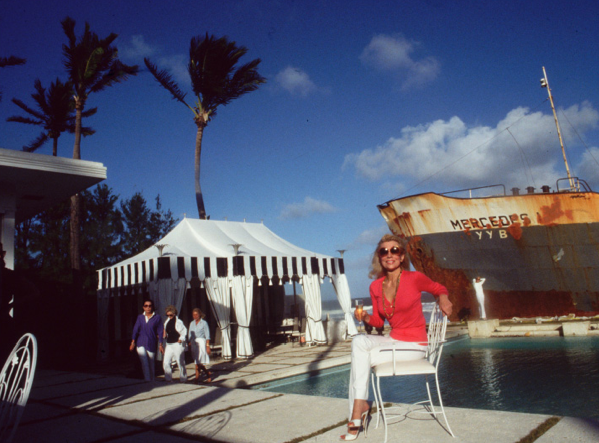 Mollie sits before The Mercedes, which barely missed her pool.

For a month the rust bucket sat at the foot of her estate. The company that owned the boat couldn't afford to remove it, as they were broke, and so they abandoned it. The State of Florida also refused to do anything, so Mollie hired a lawyer and finally a crew was sent out to remove it.  Many nights she hosted parties with the ship on her lawn, her guests making numerous wild suggestions as to what she should do with the ship, such as turning it into a restaurant or a nightclub. Mollie was furious that it took so long to remove it, saying "There's a strong possibility" she said "that if the boat had washed up on the Kennedy property, it would be gone already." The whole event sounded like a movie, and that is what Walt Disney Company thought, too. A few weeks later, they contacted Mollie and proposed to her the idea of making the whole affair into a movie "Palm Beached", with Bette Midler or Melanie Griffith playing her. She came out strongly against the idea, claiming they were trying to turn Palm Beach into Beverly Hills. After languishing in development, it died off.

Mollie Wilmot died in 2002, in her seventies many believe. She was always reluctant to give her age, and told many people many di