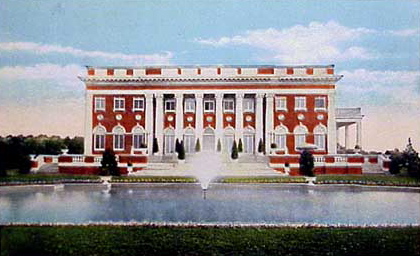 When the wealthy frenchman Emile A. Bruguiere died, he left his widow, Josephine Sather, daughter of the founder of San Francisco's first bank, a small fortune of $1 million and he left his son Louis S. another $1 million, surely enough to enable them to live a comfortable lifestyle. Or so you'd think. 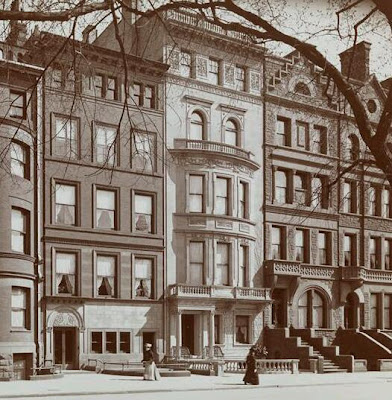 Mrs. Bruguiere's Townhouse In New York City (middle, white) Was One Of The Few Of That Size To Have A Ballroom.

upon inheriting her fortune, Mrs. Bruguiere decided she wanted a cottage in Newport, RI, where she and her son could reside in the summers with the rest of society, so she turned to architect Edward Whitman. Whitman would be working with a somewhat restrained budget of $200,000, with $75,000 of that going toward furniture. To save money, Josephine chose a site on the outskirts of the city, far from the fashionable districts. While construction was underway on her $125,000 chateau, Mrs. Bruguiere and Louis traveled the world collecting furniture, paintings, artwork, tapestries and valuable objects to furnish the home, they ran over their $75,000 furniture budget by $20,000. 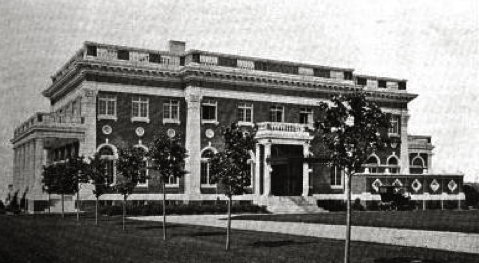 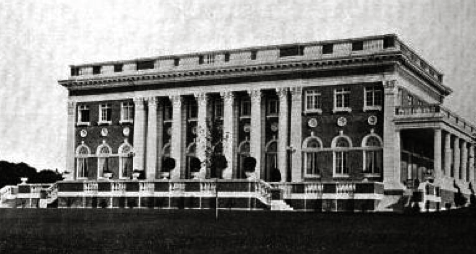 When "Castlewood" Was Completed, Josephine Opended The House With A Lavish Party

The budget of "Castlewood" had run over by $75,000 making the total cost of the house $200,000 and another $95,000 for furniture. Nevertheless it didn't matter to Josephine, who could not manage her finances very well, and she moved in promptly after it was finished. She opened the house with a lavish ball, costing $50,000. Guests marveled at the beautiful interiors and decorative details. Whitman had designed the interiors and the floor plan of the first floor around entertaining. The first floor housed the main rooms and the upstairs held the bedrooms. 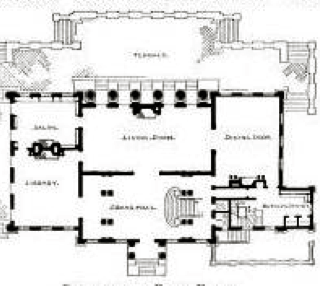 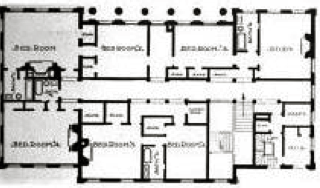 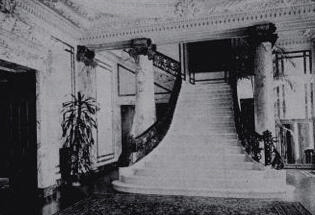 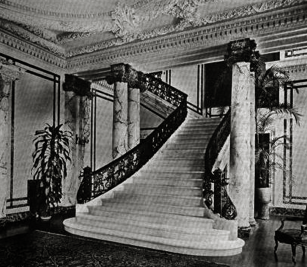 The Entance Hall Was Done In Marble Stone 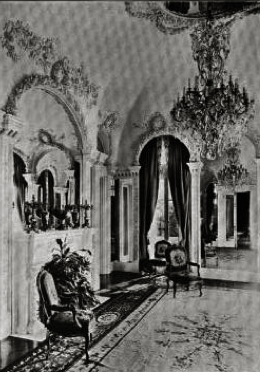 The Salon's Floor Was Covered In A Beautiful French Rug 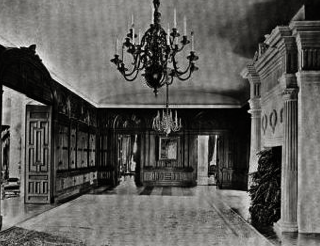 The Original Ballroom, Before It's Renovation In 1910 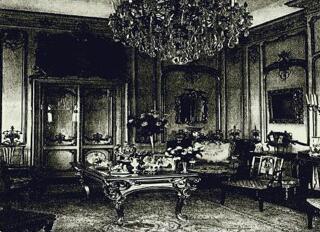 The Ballroom After It's Renovation In 1910 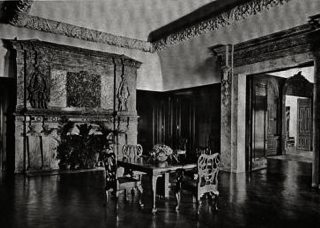 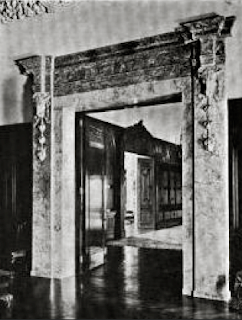 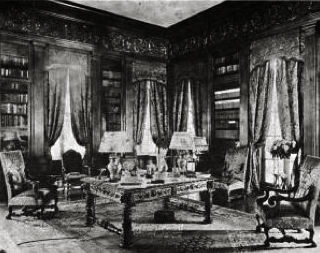 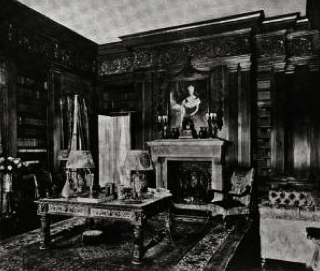 The Library Fireplace Was Adorned A Portrait Of Mrs. Bruguiere Posing In Paris, France 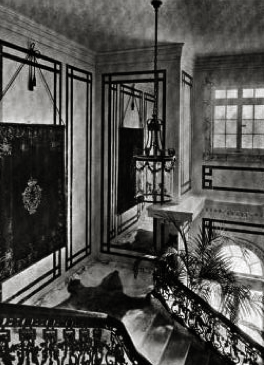 Stairs Going Up To The Second Floor 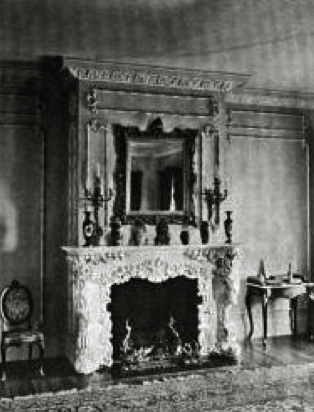 Within 2 years of moving in Mrs. Bruguiere became deep in arrears with her Newport accounts. She was spending more than her annual income monthly and was constantly renovating her two homes. By 1913 all she had left was less than $150,000 and she was silently selling her husband's art collection and statuary off to raise money to pay the bills. Her bills were astronomical and included, $15,000 on taxes for her New York City residence and $38,000 on "Castlewood"'s taxes, she spent $30,000 on her yearly wardrobe, $25,000 for staff payments and to upkeep both of her home, $7,000 yearly for the yacht she was renting and almost $100,000 on the yearly renovations she did to both of her homes. Her son, trying to help, married the enormously wealthy widow, Margaret "Daisy" Post Van Alen, and tried to use her fortune to help his mother. 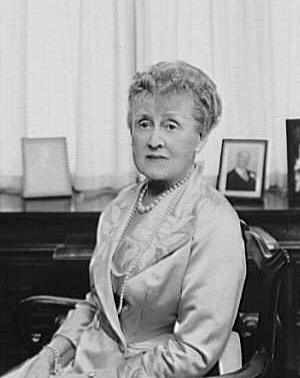 The Vastly Wealthy, Daisy Van Alen Lived Formally At Her Newport Estate, "Wakehurst". Daisy Was Said To Have Inherited A Total Of $32 million From Her family Which Included Posts, Van Alens, Astors And Vanderbilts


In 1913,"Castlewood" was taken by the bank and they auctioned off it's contents for a total of $100,00. Josephine had attended the auction and had bought a few of her things, such as the tapestry that hung at the top of the staircase and the rug in the salon. Josephine sold her New York City townhouse and sold most of it's furniture for a total of $350,000. Since she also sold a small part of her jewelry collection for some $100,000, Josephine was able to retain her apartment in Paris, but cut her the original staff that had attended her at her three homes from 27 to 6. She moved into a suite of rooms at the Sherry Hotel and continued to live in Newport, renting various homes and their contents for the seasons. Mrs. Bruguiere only did this for 2 more years, because in 1915, while traveling back from Europe, Josephine and Louis were on the ocean line "The Arabic" when it was torpedoed and sank. The Bruguieres were in their first class suite when it happened. Louis was dressing when he felt it hit, he ran to the closet, grabbed the lifebelts and ran into his mother's room. He strapped it on to Josephine, who was having breakfast in bed, and threw a fur coat on her. He did the same with her french maid and then they rushed to the boat deck. When they reached the boat deck, it had been 4 minutes since Louis had rushed into his mother's room but they were too late, all the boats were gone.

The S.S. Arabic, Which Sank In Less Than 10 Minutes

Josephine began to go back to retrieve her jewels but Louis made her stay. They were finally thrown from the ship into the water. Josephine's maid was thrown to her grave because as soon as she hit the water she was sucked under. Louis and Josephine stayed together, with Louis carrying his mother on his back, but he lost her when she was sucked under. Louis survived but Josephine was never found. After the Bruguieres departure, "Castlewood" was bought by Arnold Essex who moved in with his wife and family. It was later bought by Mrs. John H. Hanan who was it's final private owner. "Castlewood" was finally demolished later on, but not before vandals ransacked the place. The land is now subdivided.