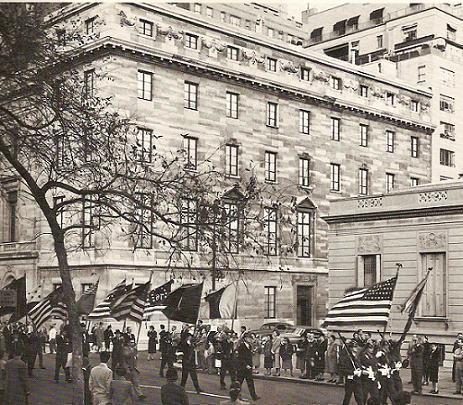 After her husband's death and 4 years of mourning, Florence Twombly felt her current New York City residence did not prove suitable to her lavish entertaining, so she sold the property. Florence commissioned architect Whitney Warren to design a 70 room palace on a narrow lot at the corner of 71st Street and Fifth Avenue. Florence Twombly had been born to William Henry Vanderbilt and Louisa Kissam Vanderbilt at their Staten Island home and later on moved with them to a new residence at 459 Fifth Avenue. On November 21, 1877, she married the vastly rich Hamilton Twombly of Boston, much to the pleasure of her father, in a lavish ceremony at St. Bartholomew's Church on Madison Avenue. Unfortunately the wedding took place during the case of William's father's, The Commodore, will and an angry mob stormed the church during the ceremony although they were kept back by the ushers and police men. This experience undoubtedly added to the Twombly's dislike of the public and they at all costs avoided the press. The Twomblys settled into a comfortable routine of life: winters spent in their New York City townhouse, summers at their Newport residence "Vinland" and springs and falls at their country place "Florham". They led lives like royalty and were treated like such.  When Vanderbilt died he left Florence $10 million and when Hamilton died he left her $78 million, meaning Florence could have whatever she wanted and was one of the wealthiest heiresses in the world . Her New York City townhouse reflected that with over 70 rooms and many modern day luxuries such as bathrooms with every bedroom and two elevators. Upon entering the home, one was greeted with a small vestibule which led to a marble stair hall, to the left was the mens' dressing room, reception room and library while to the right was the ladies' dressing room and the drawing room. The second floor housed the two principal entertaining room the dining room to the left and the ballroom to the right facing Central Park as well as the second floor hall used mostly for musicales or performances. On the third floor was Mrs. Twombly's bed, bath, dressing room and boudoir, daughter Ruth's bed, bath and dressing room and two other bedrooms each with it's own bath and dressing room. The next two floors housed guest bedrooms, servants room, two boudoirs and a billiard room. The area Florence chose for her mansion was becoming highly fashionable as society moved uptown: next door was the townhouse of heiress Eleanor Widener, across the street was the mansion of Henry Clay Frick, down the street was the townhouse of Henry Sloane and down the block friend Ruth Mills had built her gothic townhouse. Florence entertained lavishly in her new home until her death, after which it passed to her daughters Ruth and Florence along with some $22 million. By this time commercial invasion had engulfed her home and that of Mrs. Wideners next door. Shortly after, Ruth died and Florence sold the property to developers who tore the mansion down along with the residence of Mrs. Widener to build a large apartment house. Florence's townhouse had the distinction of being the last private residence in New York City built during the gilded age.
Posted by Tyler Hughes at 7:59 AM