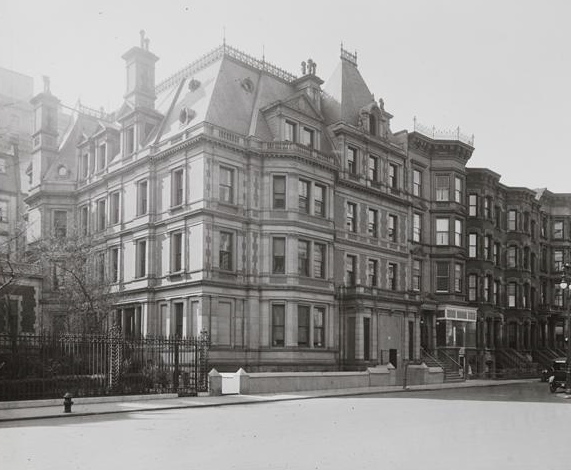 In 1882 New York broker William J. Hutchinson commissioned architect George B. Post to design a large French Renaissance style townhouse on a small lot in the middle of an ocean of brownstones. 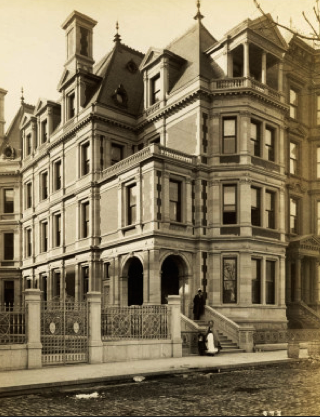 William J. Hutchinson's Townhouse, That's Him Standing On The Stairs

Located at 4 West 58th Street, it was in a neighborhood that was then becoming fashionable, for example, next door Cornelius Vanderbilt II was commissioning Post to enlarge his mansion, making it the largest home ever built in New York City, Mary Mason Jones's "Marble Row" was located beside  the Vanderbilts, Collis P. Huntington's mansion, also designed by Post, was rising behind "Marble Row" and beside the Huningtons was the mansion of Frederick Stevens.

Soon after moving in, Hutchinson sold the house to Millionaire Charles B. Alexander, who bought it as a present for his wife Harriet Crocker. Alexander was a lawyer and director for numerous companies including The Equitable Life Insurance Company, Middletown & Unionville Railroad, The Hocking Valley Railroad and several banks. His wife Harriet Crocker was daughter of railroad magnate Charles Crocker and inherited part of his large fortune upon his death. Harriet had a love for the opera and she owned numerous boxes in several opera house including the Metropolitan Opera House. Harriet was also a socialite and a wonderful hostess, know for her large dinner parties and exclusive balls. After purchasing the Hutchinson mansion, Harriet hired the architectural firm of Warren & Wetmore to renovate and add on to the townhouse, buying the brownstone next door and tearing it down to create more space. 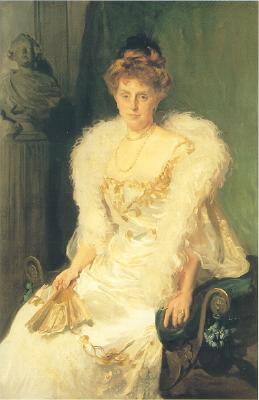 Harriet demanded that a ballroom be included in the plan of the house. She commanded the ballroom be able to hold at least 500 people and have walls large enough to hold her large tapestry collection. Charles though it absurd but Harriet demanded a ballroom, finally Charles consented and told Warren & Wetmore to replace the garden with a ballroom. The renovations on the home doubled the size of the mansion and included 10 bedrooms, 13 bathrooms, 16 servants, a large dining room, library, drawing room, breakfast room, den, private master suites for the Alexanders and finally the ballroom. The total cost of the renovations were said to run up to $1 million. 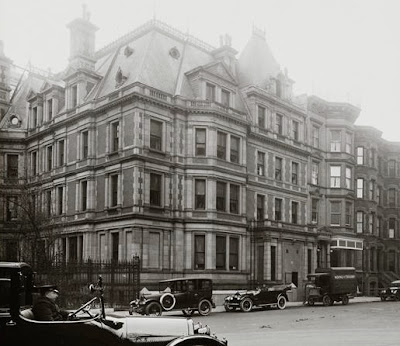 The Townhouse, Once Completed, Was A Showplace For The Alexanders 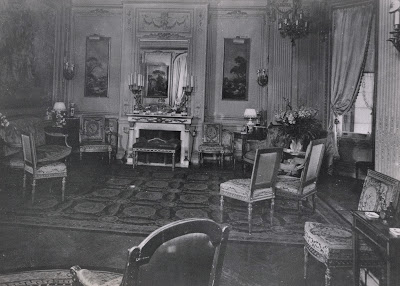 The Drawing Room, Where Mrs. Alexander Had Tea In The Morning 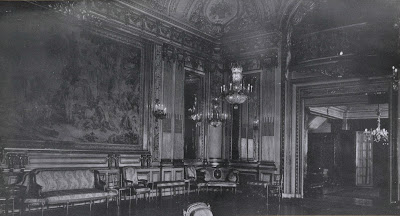 The Ballroom, The Scene Of The Alexander's Daughter's Wedding

Upstairs on the second floor were the Alexander's Private suite each with it's own bathroom, dressing room, den for Mr. Alexander and a boudoir for Mrs. Alexander. The next two floors held 8  guest bedrooms each with own private bath and dressing room, 2 boudoirs and a sitting room. The top floor held 8 servants rooms, 2 baths and the housekeeper's sitting room. The Alexanders were very proud of their townhouse and offered to host the wedding reception of their niece, Eleanor, 's marriage to Theodore Roosevelt Jr. 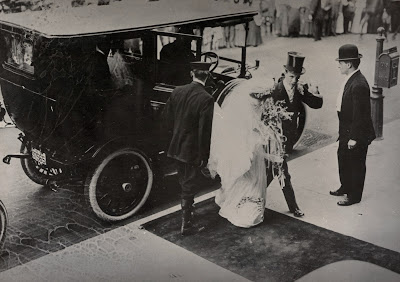 The Alexander's Niece, Eleanor, And Her New Husband, Theodore Roosevelt Jr., Arrive At The Alexander's Townhouse For Their Reception, Which Was Held Mostly In The Ballroom

The Alexander's were prominent members in society, especially Harriet, and would attend and give lavish parties in their New York City residence and their large fortress-like residence in Tuxedo Park. 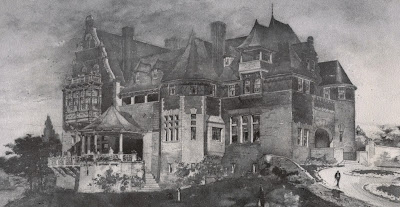 The Alexander's Tuxedo Park Estate Was A Regal Showplace

The Alexander's also attended many famous balls and parties including Alva Vanderbilt's famous ball in her New York City townhouse which launced the Vanderbilt's into society. They also were frequent members in the court of St. James, at which Mrs. Alexander was always attired in a gown by Worth. One of the most famous parties they attended was The Bradley-Martin Ball held at the Waldorf-Astoria given at a cost of $9 million, one of the most expensive parties every held. 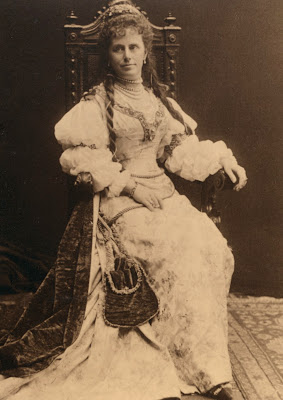 For The Bradley-Martin Ball  Harriet Alexander Wore A Magnificent Costume Made By Callot Soeurs, Paris

In 1927, on the death of Charles, Harriet inherited a large fortune of some  $10 million and all of their residences. Mrs. Alexander continued her lavish entertaining, but by that time commercial invasion completely surrounded Mrs. Alexander and her townhouse, along with the townhouses of Alice Vanderbilt, widow of Cornelius Vanderbilt II, Arabella Huntington, widow of Collis P. Huntington, and three brownstones next door to Harriet. 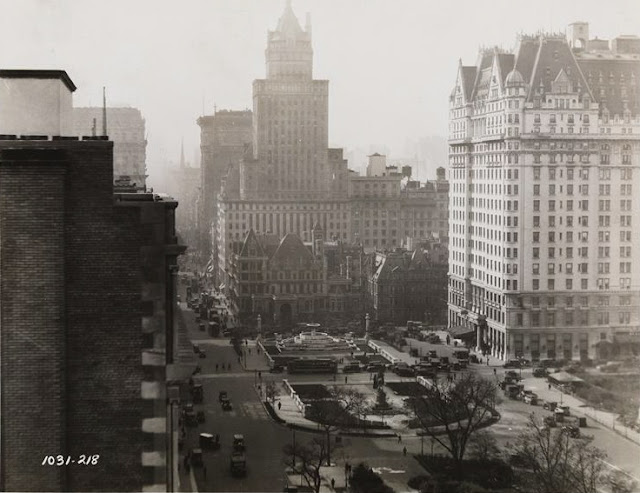 Something had to give, and finally something did. Alice Vanderbilt could no longer afford her massive townhouse with taxes $130,000 a year and was forced to sell it to developers for $7 million. Alice's home was promptly replaced with the Bergdorf Goodman department store which leveled her massive chateau to rubble. Soon after, Arabella Huntington died and her son sold her townhouse to Tiffany & Co. who also leveled another Fifth Avenue Palace. With these new developments, Harriet finally gave up and moved to her Paris apartment permanently. Although Harriet kept her townhouse and Tuxedo Park fortress, they sat boarded up, the few lasting monuments to an era by now long gone. On Harriet's death in 1935, her homes were sold and quickly demolished. Who could afford to maintain a massive fortress in Tuxedo Park with taxes rising up to $83,000 a year and a townhouse with taxes almost $75,000 a year.  Three years after Harriet's death, her home was demolished to make way for the Paris Theatre. 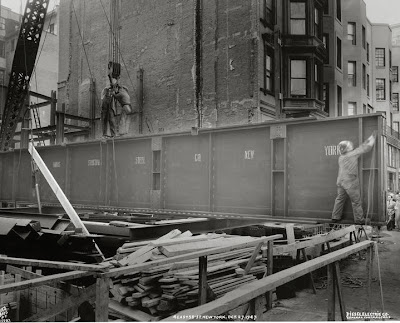 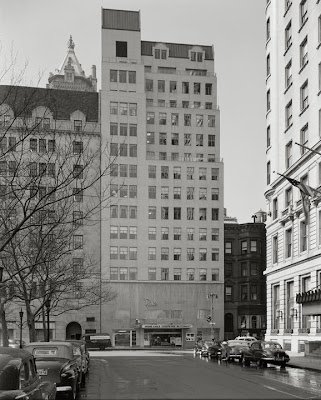 Harriet's Home Was Replaced With The Paris Theatre, The Brownstone That Was There When William J. Hutchinson's Lived There Was Still Standing But Was Soon After Demolished