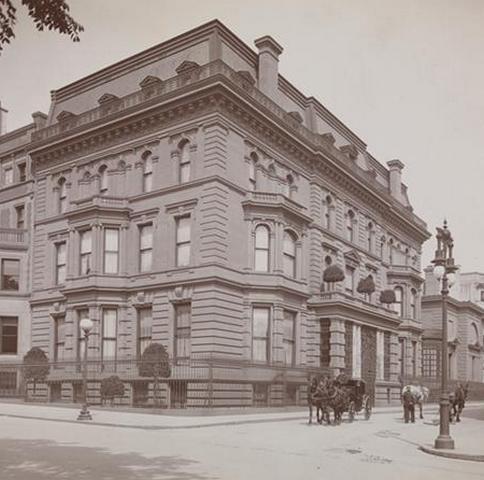 In 1883 sugar king Robert L. Stuart built a massive home on the corner of 871 Fifth Avenue for him and his wife Mary. Sadly Stuart died the previous December so his widow had to finish the home. This meant she oversaw all of the interior designs and helped to create the famous art gallery. After the home was complete she rewarded the architect, William Schickel, with a $10,000 bonus on top of the cost of the home which was around $400,000. 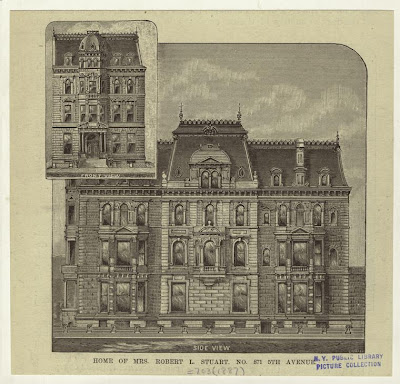 
Mrs. Stuart died in 1891 and her heirs put the home and the furnishings on the market for a large sum of $650,000. It was bought a few years later by millionaire William C. Whitney for his second wife Edith. By 1896 the house was looking extremely outdated an example was the art gallery which was stacked floor to ceiling with paintings and artwork. 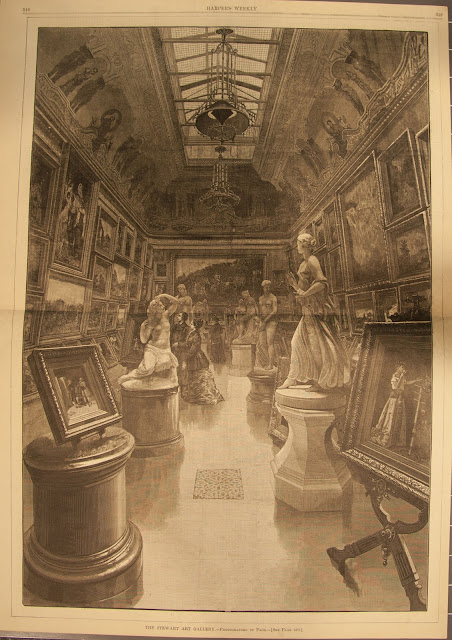 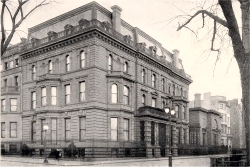 Whitney called in Stanford White to perform a $3.5 million dollar renovation to the property. Tragically  in 1899 a psychological bullet shot through William's heart as Edith died from a riding accident at the Whitney estate in North Carolina. William immersed himself into the renovations supervising every detail. After the home was completed the home was said to be another one of White's many accomplishments. The renovations had included a new side entrance and a new ballroom wing said to be the largest in New York (this was before Mrs. Astor moved to her new home). Whitney opened the house with a coming out (in              society) ball for Whitney's niece Helen Tracy Barney. Whitney sent out 700 invitations to all of society and had the house prepared for the large event. On the night of January 4 1901 society danced in the massive ballroom and dined in the baronial dining room of 871 Fifth Avenue. Among the invited that night were Mr. and Mrs. Stanford White, Charles Follen McKim, Caroline Astor  (ablaze with diamonds), Mr. and Mrs.(the first out of two) John Jacob Astor IV, Mr. and Mrs. Clarence Mackay, Mr. and Mrs. Whitelaw Reid, Mrs. Theresa "Tessie" Oelrich and her Herman, Mrs. Oelrich's sister Virginia Fair and her husband Willie Vanderbilt Jr., Willie Jr.'s father William Vanderbilt, Mr. and Mrs. Stuyvesant Fish, Prince Trobetskoy, Prince Ruspoli and finally Edith Wharton with her husband Teddy. 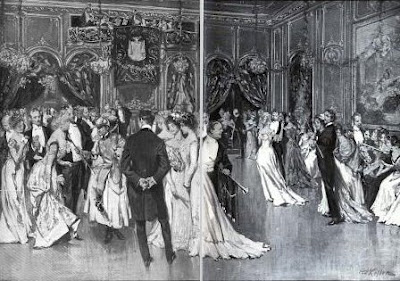 The interiors of the mansion were even more magnificent than the balls given in them. Upon entering the home one was greeted by a beautiful stair hall with beautiful tapestries along the walls. 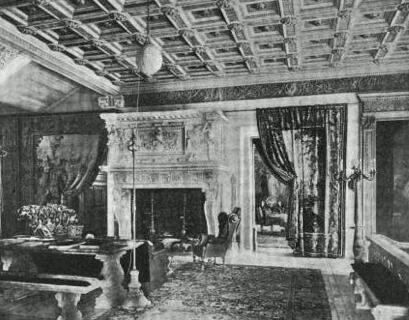 The magnificent staircase was done in beautiful marble and line along the walls with silk tapestries and beautiful decorative art pieces. The most famous tapestry was "The Drowning of Britomartis" a silk and wool piece made in Paris, it now hangs in the Metropolitan Museum of Art gift of Whitney's grandchildren. 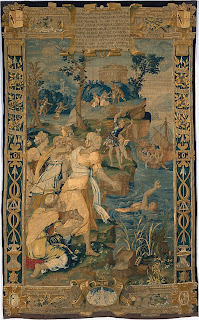 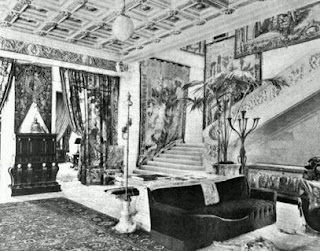 "The Drowning of Britomartis" is the first tapestry up the stairs


Off the the stair hall one could enter the drawing room were visitor's were greeted with Van Dyck's portrait of William De Villiers. The drawing room had remained were it was when the Stuart's were in residence but had undergone a serious renovation by Stanford White. The drawing room had then been graceful and elegant with beautiful paintings gracing the walls and gold coffered ceilings. 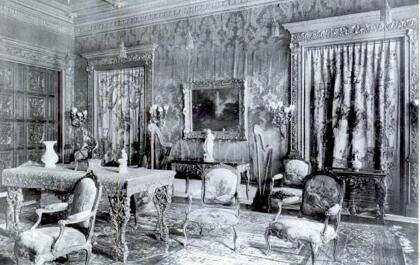 One could also enter the massive dining room which could seat 200 which had a baronial fireplace all the way from Rome, floors covered with "priceless" persian rugs, ceilings imported from a palazzo in Genoa and walls decorated with 16th century Italian murals. 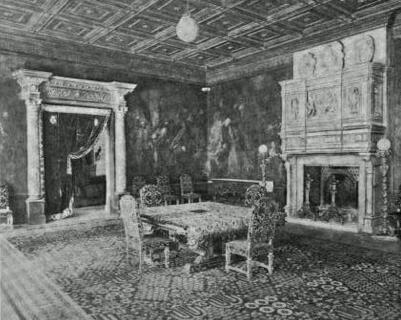 Also on this floor was the library. The library held Whitney's collection of antique volumes all the way from France. The ceilings had come from a antique dealer in Paris and the furniture was mostly sixteenth century. 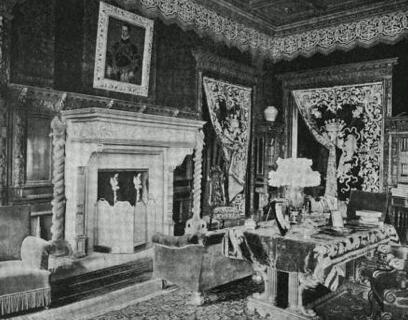 The biggest room in the large mansion was the ballroom which was 63 ft. by 45 ft. and had replaced the Stuart gallery. The walls were made decorative carved and gilded oak panels from a chateau near Bordeaux and the furniture was 18th century french. Several tapestries were hung around the ballroom which depicted scenes from "The Iliad" and most of the painting were European with a few American done. A large musician's balcony was at the upper heights of the ballroom to allow their elegant music fill the room on a ball night. 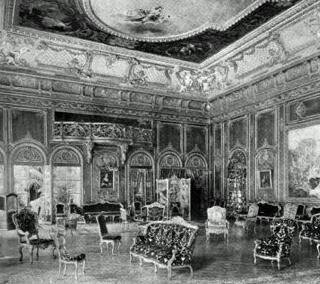 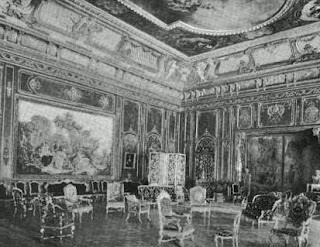 After Whitney died 1904 the house was sold, along with furnishings, to James Smith. After he died the home and furnishings were to be auctioned off one by one. To save the famous collection his father had established, Harry Payne (Whitney's son) bought everything. Harry had been born in his father's first home at 2 West Fifth Avenue right across the street from Cornelius Vanderbilt II and his family. When Harry was 21 he married Mr. Vanderbilt's daughter Gertrude and was given 2 West Fifth Avenue as a wedding present from his father. When his father died he had inherited a fortune and his father's Old Westbury estate. Harry bought 871 Fifth Avenue back for $3 million and moved his family into it. When Harry died in 1930 he left it to Gertrude who lived there till 1942 when she announced the auctioning off of the home. She died 3 days after this announcement and the home was auctioned on April 30 then a year later the home was demolished.