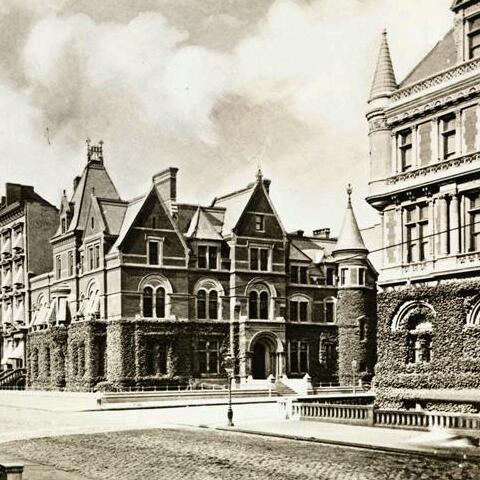 In 1875 Millionaire Frederick W. Stevens commissioned architect George Harney to design a french mansion for him and his family. Harney raided European antique shops to find french furnishings for the home and spent heavily during auctions to find the very best antiques to ship back to New York City. The result of all this work and shopping was beautifully crafted interiors filled with European spoils and french antiques. The ground floor contained the entertaining rooms which included a library, salon, dining room, study and reception parlor. The large dining room which could seat 75 people had walls covered in old Spanish leather that had been collected piece by piece in Spain while the library, salon and study walls were draped with Gobelin tapestries. The house was unique in the fact that it had it's own ballroom, not an art gallery that doubled (Caroline Astor mansion) , not a parlor that double (original Cornelius Vanderbilt II mansion), not a hall that doubled (Paran Stevens mansion) but a distinct ballroom near the rear of the first floor. Also on the first floor was a small art gallery and service pantry. After Mr. Stevens died his widow remarried and sold the property to Oliver Payne who gave it to his sister Flora and her husband William C. Whitney. They commissioned White to remodel the house and finally moved in. In 1893 Flora died from a severe heart attack and Whitney remarried and moved to a home he had built at 871 Fifth Avenue so he gave it to his son Harry Payne and his wife Gertrude Vanderbilt whose parents, the Cornelius Vanderbilt IIs, lived across the street. 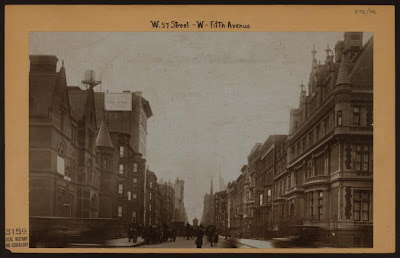 The Whitney mansion (left) and the Vanderbilt mansion (right)
Harry and Gertrude lived there for quite some time rotating between New York City, "The Reefs" their cottage in Newport and an estate in Old Westbury. In 1907 Harry and Gertrude moved to their father's residence at 871 Fifth Avenue and sold the mansion to developers who demolished it and built a massive skyscraper that towered over Gertrude's parents home across the street.