Of all the homes in Newport still in private hands, 'Beaulieu' is amongst the most famous. Presently the year-round residence of Ruth B. Wheeler, the home has a rich and interesting history, being home to not only Astors and Vanderbilts, but also the scene of hundreds of lavish
parties and events.

Ruth Buchanan Wheeler, one of Newport's most outspoken matrons, is famous for her Lunch parties
Photo: Nick Mele

First coming to Newport in 1960, They quickly decided they wanted to live here
Ruth and her first husband Wiley T. Buchanan, who was serving as President Eisenhower's Chief of Protocol , first came to Newport 1960, coming with President Eisenhower who summered there, first at the Naval Base and later at the 'Eisenhower House'. They were staying with friends at 'Clarendon Court' when they decided to take a walk along the Cliff Walk. Soon they came upon a decaying estate next door, which had been unseen by them due to the large, overgrown grass and forest of trees surrounding it. The windows were smashed in, the porched gone, graffiti all along the walls the gardens infested with weeds, the home crawling with bugs and rats. The interior was destroyed and had had severe water damage, so bad it looked like there had been a fire. That home was 'Beaulieu'.

Wiley was determined to save the home, which he shortly after bought for around $100,000.
Within a year, the home was as gorgeous as ever. The Buchanans had replaced the porch, added a kitchen, restored all the rooms with french antique panelling and fixtures, rewired the house with electricity, replaced all the windows, restored the gardens, fixed the roof, fixed the plumbing and painted the exterior. They hired legendary designer Valerian Rybar to decorate the interior. Brought in a team of 13 gardeners to maintain the grounds and an additional 15 servants to work inside. Extended the garage and greenhouse. They brought 'Beaulieu' back to life. 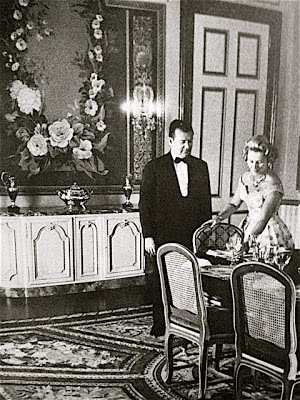 Life at 'Beaulieu' with the Buchanans was formal, yet cozy

Ruth Buchanan, later Wheeler with marriage to Ed Wheeler after remaining a widow for more than a decade, is now in her 90's

Today, Ruth lives alone in her elegant home. Visited by family and friends, her newest thing is
to host Sunday luncheons. At 'Beaulieu' the work is never done, as Ruth comments "We are always having to replace something". Yet despite the tremendous amount of work it takes, 'Beaulieu' still remains one of Newport's finest private estates.