Chateau Sur Mer was built in 1852 for William S. Wetmore, a wealthy China Trade merchant who wanted a oceanside mansion to display his wealth. The grand mansion was designed in a heavy victorian style, with antique walls and ceilings. Since he was in the China Trade, he had developed a large collection of china, which he housed in a large walk-in china closet.

When he died, the chateau and a large fortune was left to his son George Peabody Wetmore. A life long Republican, George served as governor of Rhode Island and was in the electoral college in 1880 and again in 1884. He brought in architect Richard Morris Hunt to turn the simple villa in a palatial chateau. Besides adding a ballroom and guest wing, Hunt also moved the entrance to opposite side of the house, under the newly constructed porte cochere. When George died, the house and estate was inherited by his two daughters, Edith and Maude.

Edith Was A Passionate Gardener Who Had A Taste For Pearls

Edith and Maude had both grown up at Chateau Sur Mer, living the typical Newport lifestyle: Mansions, yachts, jewels, parties and money. Maude, the eldest, followed in her father's footsteps and became a staunch Republican supporter and she, for 30 years, headed up Rhode Island's Women's Republican Committee. Edith became a passionate gardener and she had a lavish taste for jewels. They had grown, unlike many Newport debutantes, to love their freedom and both chose not to marry. The men in their lives were their relatives, friends, lawyers, advisers, bankers and servants. Edith lived at Chateau Sur Mer year around, while Maude wintered in Washington DC. 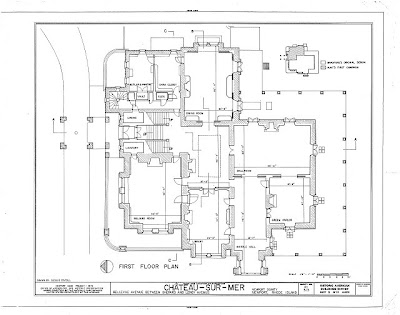 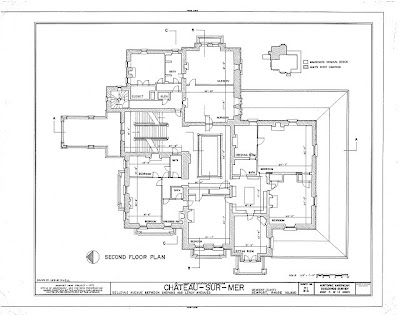 With Maude's passing in 1952, Chateau Sur Mer became Edith's entirely. With the death of many of her friends and the people she had grown up with shortly after, it prompted her to say "There is no use talking about it, we are the end of an era if you please". In 1962 she was photographed by Nancy Sirkis for her book "Newport: Pleasures and Palaces". It showed her presiding over her brilliant silver tea service (the photo of her shown above). That same year, she was visited by her distant relative Julia Stonor, who was the niece of Noreen Drexel. In 1966, Edith died at her home. She was "The end of an era", the Wetmore era that is. Chateau Sur Mer was left to the Preservation Society of Newport, which both Maude and Edith had been founding members of. The society still manages the estate and recently completed a major restoration of the house.