Noreen Stonor Drexel (left) At The Breakers Ball In Newport

On November 6, 2012, Newport philanthropist and socialite Noreen Drexel had a massive stroke and unexpectedly died that very day. She was 90 years old.

She was born to Lord and Lady Camoys of Stonor Park. She grew up at regal Stonor Park, visited by her aunt, uncle and cousins, her favorite being Eileen Gillespie, later Eileen Slocum.

As war loomed in England, Lady Camoys took her daughter, still a teenager, to Newport to stay with her grandparents, the William Watts Shermans, where she became active in the war effort. She was head of the Newport War Bond Drive and served as chairwoman of Bundles for Britain.

In Newport, she met and married millionaire John R. Drexel III, whose family had been summering in Newport for generations. They lived, for a time, at the Drexel's Newport estate Cliff Walk, until she and John commissioned their own Newport cottage, Stonor Lodge, named after Stonor Park in England.

She volunteered at the Newport Naval Hospital where she had many jobs and worked in the Motor Pool as an ambulance driver. She was often on the scene of fires, hurricanes, and other disasters. Her tenure at the Naval Hospital continued through the Second World War, the Korean War, and the war in Vietnam.

Mr. and Mrs. Drexel wintered in Palm Beach, Florida, where she ran the American Red Cross office. She was an early advocate of substance abuse prevention and launched a program with the local police geared to teaching youngsters about the dangers of substance and drug abuse. Students were taken to local jails to witness the havoc that such abuse could cause in life.

She founded the Childbirth Education Association of the Palm Beaches and helped produce a movie, First Breath, which promoted the Lamaze method and gave mothers- and fathers-to-be information on what to expect during the birthing process. She would smile when recalling how on opening night, several fathers-to-be fainted when they saw what was coming.

The Drexels were active in Newport society and they regularly attended Newport Balls and Parties. She attended The Tiffany Ball at Marble House in Newport, where she chatted with John and Jackie Kennedy and swirled under the great ballroom chandelier in the arms of John Nicholas Brown.

In New York, where she and John had a large, entire-floor apartment overlooking Central Park, she was involved in the Hospital for Special Surgery, the Beekman Downtown Hospital, Memorial Sloan-Kettering Cancer Center, and the New York Hospital—Cornell Medical Center. She was Chair of the Woman's Division of the Lying-In Hospital of the City of New York.

In recognition of her energy and hard work, she became a member of the Foundation for International Child Health and The White House Conference on Children and Youth.

In Newport, Mrs. Drexel has been a Trustee and Chair of the Alletta Morris McBean Charitable Trust. Under her leadership, the Trust has supported the Newport Hospital, Salve Regina University, churches, the Touro Synagogue, schools, libraries, social service organizations, the City of Newport, and many other charitable organizations. 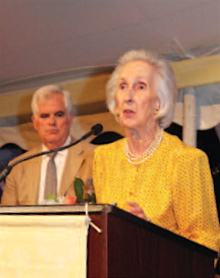 In recognition of her service to the City-by-the-Sea and so many others, she was awarded the degree Honorary Doctor of Humane Letters from Salve Regina in 1999. She served for many years on the University's board of trustees.

In 2007, John died, leaving her a large fortune. This fortune, added to William Watts Sherman's fortune, which she also inherited, made her one of the wealthiest ladies in all of Newport.

She was a guest at a massive Centennial Gala at The Elms in Newport. The fundraiser ball for the Preservation Society charged $1,000 per person. At this ball was Eileen Slocum (her dear cousin), Edward and Ruth Wheeler, Ruth's son Wylie Buchanan III, Candy Van Alen, Captain Nicholas Brown and Annie Brown, Nicole duPont Limbocker, Jacqueline Astor Drexel and Nelson Aldrich.

That year she gave Stonor Park to her son John R Drexel IV, as a residence. She moved to a smaller, one-story, cottage on the property.

On November 6 2012, she was having breakfast in the dining room of her Newport cottage when she had a massive stroke. She died while in the hospital. The death was unexpected.

Noreen was a wonderful woman, Newport took a deep loss in losing her.
Posted by Tyler Hughes at 3:09 PM