The Auditorium of The Metropolitan Opera House In 1939, Every Seat Was Filled That Night With Ambitious Debutantes and Eager Socialites

Going to the Opera had always been a sign of social status. Before the Metropolitan, there had been the Academy of Music, and before that there had been The Astor Opera House, both where the elite of New York had attended for the Opera.

But it was the Metropolitan Opera House that had served New York City society for the longest. Not only was it much larger the both The Academy and The Astor, but it was also far more grander and luxurious. The Met had a seating capacity of 3,635 people and numerous rows of boxes for the wealthy to purchase, the most famous and fashionable row being the Diamond Horseshoe (Which Caroline Astor claimed had been named after her famous 200-stone diamond necklace).

The First Metropolitan Opera House Located at the corner of 1411 Broadway, Now The Site of A 40-Story Office Building

One of the most fabulous nights at the Met was the night of January 1 1896. The reason for this was not only that January firsts were the opening of the New York City Social Season, but also because Mrs Astor's Annual Patriarch's Ball that night would be held in her new mansion she had built at the corner of 65th Street overlooking the Central Park (To Read About The Residence Click HERE). It would also be the first night Mrs Astor attended the Opera since her husband's death in 1892.

At The Met On The Night of January 1 1896, The Opening of The New York City Social Season and The Evening Of Mrs Astor's Annual Patriarch's Ball 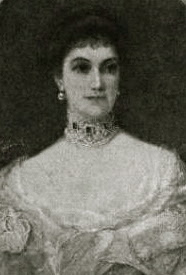 There would be many more nights like this throughout the years, up until 1908, the year the Caroline died. After that New York City society was never the same, and The Met never again had a patron as strong as Caroline, except for Grace.

There Was Never Anyone Quite Like Grace Vanderbilt, Smart, Witty and Humorous, She Was Beautiful In Her Younger Years. Her In-Laws Were Very Much Against Her Marriage To Their Son

Grace Vanderbilt was said to be the only person ever to succeed Mrs Astor as Queen of New York City society. Every year until her death she could be seen attending the opening night of The Met. Ever since Mrs Astor's death in 1908, and Grace's succession the following year, the next 58 years would remain virtually unchanged.

Grace Vanderbilt Herself Attending The Opening, Accompanied By Her Three Signature Pieces: Her Silver Fox Fur Wrap, Her Diamond Bandeau (Also Called The "Headache Band") And Her Diamond Stomacher

1940 was a very important year regarding architecture for the city of New York for many reasons. It was the anniversary of the demolition of many of New York City's great townhouses, such as the mansion of Grace Vanderbilt's in-laws, The Cornelius Vanderbilts and the demolition of the massive palace Caroline Astor had built back in 1896. It was also the year that Grace Vanderbilt's husband sold their Fifth Avenue fortress at 640 Fifth Avenue, with the provision that Grace continue to live their until his death. Nevertheless, The Met still opened.

Mr. Robert Stevens and Mrs Nicholas Longworth Enjoying A Conversation And Having Dinner At The Met's Cafe

TO BE CONTINUED
Posted by Tyler Hughes at 10:53 AM